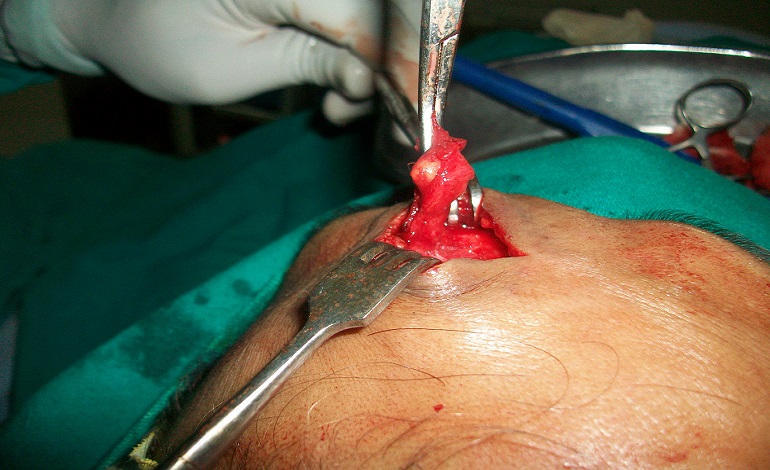 Common Mass on the Face, That May Present To Plastic Surgeon/Cosmetic Surgeon

Although most mass lesion on the Face are benign in Nature ; and can be treated by the General surgeons ; but the deformity makes the patient come for Plastic Surgery or Cosmetic Surgery intervention . During my Practice as Cosmetic Surgeon in Gurgaon , I found the occurrence of these lesions , rather very frequent ; sometimes causing very apprehensive patients .Some of the common conditions , I come across are –

Sebaceous Cyst – This is a cyst of sebaceous gland due to blockage of the duct of this gland, which opens into the hair follicle. The gland becomes distended by its own secretion. Obviously it contains sebum, which is yellowish white cheesy pultaceous material. Almost always there is a black spot on the swelling, which is the obstructed opening and is called punctum. The swelling is fixed to the skin but is quite movable over the deeper structures. Sebum can be squeezed out from this cyst through the punctum. But rarely the punctum is not visible .It is commonly seen in young adults, though no age is excempt. It may occur anywhere in the body, the commonest sites being face, scalp and scrotum. It is never found in palm and soles.

Dermoid Cyst – This cyst generally develops in the line of embryonic fusion. So this cyst may appear anywhere in the midline of the body as also in the places , where the two embryonic process meet each other , like ; at the outer angle of the orbit , in the scalp or behind the ear pinna . The swelling is round and smooth and the margin will yield to the pressure of finger and will not slip away. The swelling is free from skin and the deeper structures .When the underlying structure is a bone, an indentation may be felt at the margin of the swelling.

Papilloma– This is a simple overgrowth of all layers of the skin. Mostly it is a pedunculated growth having a central axis of connective tissue, blood vessels and the lymphatics. Papilloma may appear at any age and may occur anywhere in the body. The commonest complain is swelling and nothing else. Sometimes, it may be injured to become red, swollen, ulcerated and inflamed to present with the symptoms accordingly.

Lipoma – A lipoma is a cluster of fat cells which become overactive and so distended with fat, that it produces a palpable swelling. This is the commonest tomour of the subcutaneous tissue .It may occur anywhere in the body, hence it is known as ‘Universal Tumors’ (as it can be found anywhere except scalp and the Brain).The common sites besides face, are – back of neck,shoulder and the back.

Moles – Although many of these may be present since birth, but others appear late in life. This lesion contains an excess quantity of melanin, derived from melanocytes. Every individual has a few moles at birth, and this number increases during life. Disfiguring and black spots are main symptoms. Although commonly seen in face and limbs, but they can occur in any part of the body.

Neurofibroma – This tumour contains both neural and fibrous elements. It has many variants and Plexiform Neurofibromatosis, which occurs in connection with branches of 5th Cranial nerve, is usually found in the face.